The single “Sunset Lover” has accumulated over 200 million streams on Spotify alone since its release in 2015. The mastermind behind the track, Mehdi Benjelloun, was only 15 years old when he recorded it under the name Petit Biscuit. Although his biggest following hails from his home country of France and francophone neighbor Belgium, his shows have drawn large crowds across the world and most recently in LA, where he sold out two shows at the Fonda for his Presence North America Tour.

The show was an all-around spectacle—a roller coaster of high energy highs and mellow valleys that soothed the soul. His live performance of “Sunset Lover” has to be one of my favorite live performances ever. The iconic guitar riff echoed throughout the Fonda and dazzling visuals took the experience to a whole new level. 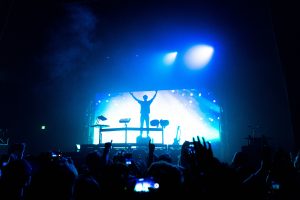 A few weeks prior to his performance, he released a pair of singles titled “Suffer” and “Safe”. This release marks a departure from his light, upbeat EDM production and treads into the territory of future bass. His new sound is darker and more complex, and I love it. It scratched an itch left unsatiated by the three-year absence of genre pioneer Flume. His performance of several unreleased tracks proved that this was not an isolated experiment. This is the new Petit Biscuit and it is here to stay.

It’s hard to believe that Benjelloun’s career is already over five years in the making, but from what I can see, he’ll be around for years to come.