Making its return to the festival is an expanded and more inclusive Taste Tent with the theme “Port Cities of the West Coast,” which offers all attendees (not just VIP’s) a chance to immerse their taste buds in culinary samplings from some of the best coast’s most talented and acclaimed chefs and restaurants.”

Lineup below! Don’t miss this sweet tasting music in the LBC! 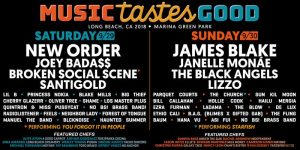