It’s our compulsion to try to put artists into categories, but sometimes our attempts are futile. If I tried to describe Yoshi Flower’s style to you I would probably fail, but that might be the point. I was able to meet up with him before his sold-out show at The Moroccan Lounge to chat and get some insight into his art.

From the acoustic melodies of I PLEDGE ALLEGIANCE, to rap verses in UNDER CONTROL, to the angsty bass in Brown Paper Bag, to pop anthems like the newly released Dirty Water, it seems like Yoshi Flower can do it all.

So is there a way to describe what makes a Yoshi Flower song? “I don’t think so, not really,” he told me in our interview,  “I’ve been trying to figure out some days how to describe it, but I think if I could describe it I probably wouldn’t make it.” 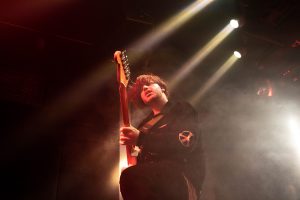 Yoshi doesn’t think too hard about how to make his music, he just does it.

“I really don’t put anything out that’s too difficult because then I think if I can’t say what I mean or sound how I like then it’s probably not meant to be.”

Wise words, but this isn’t his first adventure.

A few years ago Yoshi was part of an electronic duo from Detroit called Gosh Pith. The experience gave him a footing in the industry and laid the foundation for what would be Yoshi Flower. “I learned to be completely honest and completely honest with what I make,” he said in regards to his past project, “the most honest stuff connected with the most people.”

Since parting ways with Gosh Pith, Yoshi is alone on the stage. “When I was younger I would pretend I was just along for the ride and now I only have myself to answer to and it’s scary,” he said.  That’s not always the case though, he admits, “I do have people who help me whether it’s musically or just good relationships luckily with friends, I don’t think it’s ever somebody specifically on their own even if they’re solo artists just because it’s really hard to stay sane.”

In the year since his debut, Yoshi has collaborated with artists such as Rico Nasty, Christian Rich, and Jesse, and released seven (or so) singles along with a mixtape. 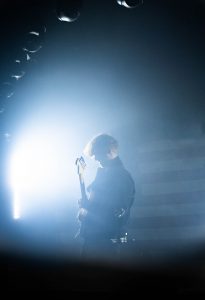 The mixtape and namesake for his American Raver Tour is one of my favorite works of the year. If I had to use one word to describe it, it would be honest. It divulges the conflict of being true to oneself versus the image we choose to and are pressured to portray. It’s a compelling story– and that’s why before his tour he announced that he would play it in its entirety, start to finish during his set. It’s not often that a concert set respects the cohesion of a single project, but it made me wish they would. It was an amazing thing to witness live. Yoshi is an amazing performer and the show was spectacular.

It’s startling to think how far he has come in the last year and he hasn’t quite processed it either.

“I used to open for those people where half the room might not even remember me, to now, sometimes I’ll forget to play and sing cause I see somebody singing all the words and I’m like ‘Are you fucking with me right now? Did someone just pay you to come here and do that?’” Yoshi told me.

With the release of American Raver and his highly anticipated single Dirty Water, he has lots of momentum going into 2019 and no plans of slowing down. At the end of the interview, he was able to give me a glimpse of the road ahead. He is in the final stages of another project called Peer Pleasure, which he said will also be a mixtape.“It’s like peer pressure, but peer pleasure,” he said cheekily. The project will explore the pressure we feel to be happy. “Sometimes it’s okay to not be happy. Sometimes the things that you need to be happy don’t make you happy, and that’s okay. Sometimes you are happy that’s cool too” he explained, “just the standard of being a cheery consumer is kind of what the next project is all about.”

He also mentioned plans to release a bigger body of work that will include his singles. He hopes this will release before the end of the year. Until then, listen to his new single and my new favorite Yoshi Flower song, Dirty Water.

See the rest of the photos at https://photosby.antoinedelcayre.space/concert