A name that has been ringing around the Los Angeles music scene quite a bit for the past year or so, UCLA had the magical opportunity of having Apollo himself perform on campus this past January. And especially from an insider’s perspective (on SCA crew), I can vouch for how eventful and fulfilling for both mind and spirit this night was.

Let’s start from the beginning. My personal role, other than enjoying this show that both SCA and CEC Concerts put so much work into, was to stock Omar Apollo’s green room along with my friend Michelle. Let’s just say, walking into Apollo’s green room with a barrel of Starbucks coffee in one hand and a tray of prosciutto wrapped cheese sticks in the other, it was evident that this artist needed fuel for this performance #CAFFEINE #PROTEIN. 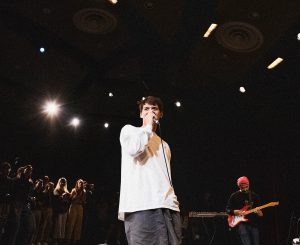 Sounds test all wrapped up and the stage good to go, the nearly half-mile-long line of students waiting for Omar Apollo’s concert were let in, and the show began. And might I say, Omar Apollo knows how to PERFORM.

Not only was his stage presence one of a kind, but his dance moves were ahead of the time, his outfit was 110% Omar Apollo (those SHOES though), and his small anecdotes between each song kept the audience feeling completely engaged and on their feet.

A precious moment between the sweet notes of pop and soul coming from Apollo and his band was when Omar asked for the house lights to be turned off and for every audience member to take out their cell phone flashlight instead. The intimacy was intoxicating as he performed “Erase,” our SCA photographer Antoine capturing impeccable photos from this moment and others throughout the evening.

The evening progressed with a mix of intimate and upbeat songs, originals of Omar Apollo that resulted in the audience undeniably singing along, some tears even being shed by some extreme fans.

Then came the flashmob.

Though it was quickly tamed and students were brought back to their seats in order to await the meet and greet, the small moment on unity Omar Apollo harnessed by inviting students onto the stage with him to dance to his last song will definitely be remembered.